What do you get when you combine two iconic aspects of Switzerland: mountains and chocolate? 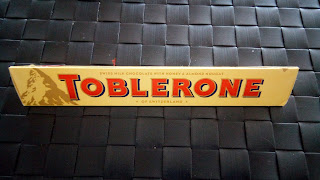 The name Toblerone is the combination of the chocolatier's family name, "Tobler", with the Italian word for nougat, "torrone".
And the unique triangular shape is the stuff of legends.

Some think the candy is a nod to the one of the most recognizable mountains in Switzerland, the Matterhorn. 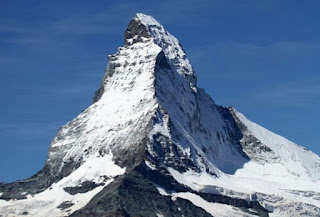 And it has been said that the shape of this chocolate was the inspiration for anti-tank defenses, or toblerones, built by the Swiss to slow any possible invasion by the Nazis during the Second World War.

While the triangular shape has remained the same, the logo of Toblerone has changed over time.
The first logo featured an eagle.
Then in the 1920's, they switched to a Bernese bear as Bern was known as "City of Bears".
In the 1930's the eagle reappeared until 2000 when they changed the logo to reflect the Matterhorn mountain, but with a nod to their home city. 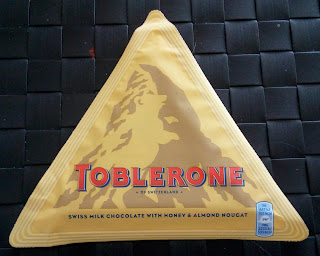 Do you see a shape on the left side of the mountain?

Yep, the Bernese bear is in profile 'hiding' on the mountain.

An interesting, and funny side note:
In 2016 Mondelēz International introduced a lighter, cheaper version of Toblerone in the UK, but it did not go over well.
In fact, some blamed the cost-cutting measure on Brexit (before Brexit actually happened!) as is illustrated by this social media meme:


And being good expats who are eager to assimilate into the local culture as much as possible, we've taken to doing what the Swiss do and eat chocolate!

According to this Forbes graph we are fitting in with Swiss societal norms:


A
milk
chocolate
triangle filled
with bits of honey
and almond melts on my
tongue. I am thankful for my
Swiss kindred spirits - a society
that loves chocolate as much as I do.
©2021, Bridget Magee. All Rights Reserved.

Linda at Teacher Dance is hosting the Poetry Friday extravaganza!
Won't you join us? 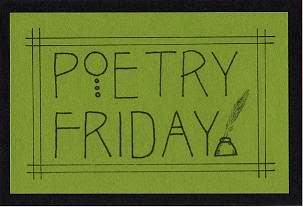 Bridget, I love this post! First, I'm a chocolate hound...way more than anyone could guess. And, the backstory of Toblerone is fascinating. I never put the triangle together with the Matterhorn. I just thought it was kinda quirky...delicious but quirky and the way Switz. did things. Love your poem. I really should write chocolate poems. I have the stuff on a daily basis. I think a trip to Switzerland is now in order!

Love your full-of-information post about Toblerone. Who knew? Your concrete poem is delicious.

It's sheer serendipity that you managed to move to the most chocolate-loving country, Bridget! Toblerone is a gift I grab when wanting to take a little gift to someone. I love them, too. And I love the history shared, so interesting to connect with all those parts of history. And I love your Tobler-triangle poem, just perfect!

Yum!! I'm swooning over this chocolaty post!! Interesting info about Toblerone and that bear :). That post Brexit version is pitiful.

What a tasty post, Bridget! And I learned so much. Fascinating, the history and the hidden bear and not-so-hidden recent attempt to skimp on the chocolate in the UK bars- grrr. So glad you are taking your expat responsibilities seriously and partaking of your fair share (yum) of Swiss chocolate. :0)

Interesting history about one of my favorite things, chocolate. Thanks, Bridget. I have been thinking chocolate as my good friend is having a birthday soon and I always get her her favorite treat, chocolate.

I'm a big Toblerone fan from way back, but I didn't know ANY of those facts. Wow and wow! I love the poem, too!

So fascinating! You are a wonder, with what you find and share. I am a kindred chocolate-loving spirit for sure. Bahahaha to the Brexit meme! The shape poem is a delight and I gotta say, though - it reminds me of a Hershey kiss. Hope the Swiss don't mind.

Yum. Now I want some chocolate!

Thank you, Linda! You must come to Switzerland and we will break chocolate together! I would love that! :)

Yes, chocolate is another plus of living in Switzerland (along with their flag ;).

Thanks, Jama! Canton Bern is known for their bears, so I love that it is "hidden" on the label. It's funny that they cut back on their UK candy bars WAY before Brexit actually went into effect. :)

Thanks, Robyn. I'm all about the sacrifice when it comes to helping the Swiss stay on top in their chocolate consumption. You're welcome, Switzerland. ;)

Thanks, Janice! I hope your friend enjoys her chocolatey treat. Even better if it is Swiss chocolate! :)

Thanks, Ruth! I love learning about brands/foods that I'd never thought much of. Lots to learn here luckily. :)

Ha ha - I love that you thought it looks like a kiss, Fran! I suppose it is a kiss of love to my Swiss home and their nummy chocolate. :)

Mission accomplished, Mary Lee! And I think I will join you in a piece of chocolatey goodness... :)

Oh, delicious. I love the secret bear and statistics revealed!

Delicious post Bridget! Though I love chocolate it doesn't love me and I can't remember the last time I had any. Perhaps my lack of eating this delectable treat is why our countries consumption is so paltry compared to others. Though the rest of my family makes up for me. Loved all the info you shared and that ye old bear is still part of the Matterhorn picture, thanks!

Fascinating Toblerone info! I like chocolate IN or ON things, but I'll admit a pure chocolate bar doesn't call to me. Glad you're doing your patriotic bit, though!

MMMMmmm...what a sweet post. I'm all for eating more chocolate and loved the history of this candy bar.

Loved learning more about this chocolate I used to love before I went to the dark side. Hmmm, wondering if they make Toblerone in dark chocolate. Wonderful shape poem! If I were still teaching, I'd offer it with sweet bits of Toblerone for Poetry Friday.

Thanks, Heidi! I aim to inform and entice! :)

Thanks, Michelle! I can't imagine life without chocolate - gotta do my part for the stats where ever I reside. ;)

Thanks, Laura! Yeah, straight chocolate is rich, but I do like the bits of nougat and caramel in Toblerone. Plus, one wee triangle takes care of any craving. :)

Thanks, Kay, you kindred chocolate-eating spirit. :)

Thanks, Ramona! Yep, Toblerone has Dark and White chocolate varieties as well. I just happen to be a traditionalist and stick with milk chocolate. :)

Well, this is certainly the perfect shape for this poem. (And so much interesting information.)