So, I have always had a funny relationship with words. Since forever my brain has had a way of making me remember names/words that are a little adjacent to the exact name/word I am trying to recall. My girls call it "Mom-Speak", but I can assure you, I've been doing this long before I ever became a mom.

Case in point: for the longest time and for the life of me, I could not remember the name Abu Dhabi even though we have family living there. I kept referring to it as Yabba Dabba Doo...much to the chagrin of everyone. BUT, they all knew what I was talking about! This just proves that even though my brain is a bit wonky, I can still get my meaning across. : )

Anywaaay, as I mentioned in M.E. Adventure: Part 1, we traveled to Yabba Dabba Doo...uh, Abu Dhabi so we could do this:

And to celebrate with these people:


While we were there, when we were not holding the baby, we did do some sightseeing: 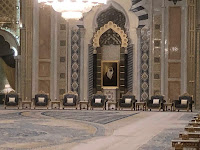 A visit to the Abu Dhabi location of the Louvre Art Museum (yeah, THAT Louvre, like the one in Paris, but in the UAE instead) : 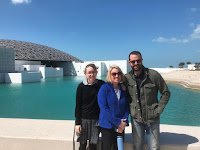 We didn't get a chance to go inside, but we did eat at a FANCY French restaurant next to the museum for Joe's birthday.


Unfortunately it was colder than we expected and Joe had to wear my scarf as a shall:


We went to the Grand Mosque:

The most surprising (and disturbing) part of the Mosque visit was the fact that you have to pass through a literal MALL when you enter and exit the tour! Most of the stores and food counters were American - including a Cinnabon!


In my humble opinion, the neighborhood mosques are much prettier than the 'Grand' one:

Geographically, Abu Dhabi is especially unique because it is a desert on the shores of the Persian Gulf. It is a kind of strange juxtaposition of geographic regions: 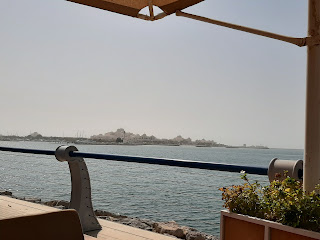 Having grown up in Orange County, California, I was struck by how much Abu Dhabi reminded me of OC - for better or worse. I did not feel like I was in what I had imagined the Middle East to be.

But at the end of the day, being with our family was the best part of visiting Yabba Dabba Doo 😉

Today's poem is about the "joys" of babies that you might forget once your kids are grown:

tiny tickles
on his tummy
soon after
something yummy

baby giggles
face lights up
and then OOPS
he spits up