Now THAT Takes the Cake!

And possibly the world record!

Zug is known for cherries. And a local bakery, Speck*, is known for their Kirschtorte (cherry cake). So much so, that they decided to celebrate their 125th anniversary by competing for the Guinness Book of World Records for the largest cherry cake. We're talking 241 kilograms and 4 meters in diameter! (*The word Speck in German translates to bacon in English! A funny name for a bakery, no? Actually, Speck is the family name of the founders of the bakery.)

The "baking party" took place in the middle of a mall in Zug. Maureen and I take our German class in a classroom above where the action was taking place, so we got birds eye view of the beginnings of the process. 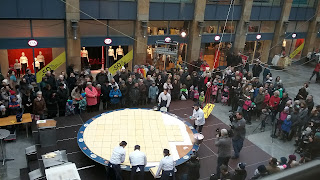 After the base was set, they set up for the next step: the cherry liqueur. I wish my blog had smell-o-vision feature so you could experience the pungent cherry liqueur aroma that permeated the mall. I think I got a little tipsy just smelling it. Of course, the baker** was flying high distributing the spirits...literally.


He was harnessed to a pulley-system with two guys in the rafters serving as his counter weight.


Using watering cans, the baker poured about 100 liters of cherry liqueur. Part of the world record requirement has to do with where the cherries in the liqueur are grown. The requirement is that "the alcohol that is used in its production must only be only Zug Kirsch (cherry) or Rigi (a local mountain) Kirsch (cherry)".

After the liqueur is poured, then the baker(s)*** spread on the buttercream...using an suspended body board, of course! 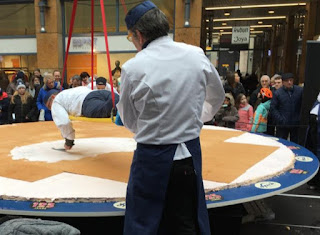 ***In addition to the flying baker, it also takes a small squad of bakers to pull this endeavor off. 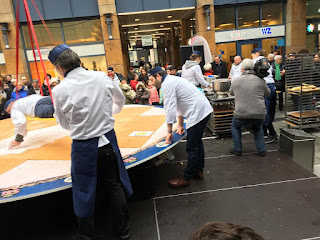 Including the ones with the map of the finished product:


The finished products gets a crunchy nut edge treatment: 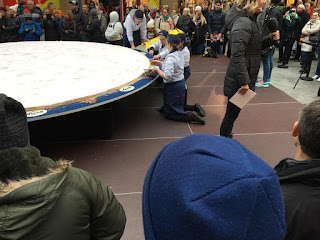 And then topped with powdered sugar:

I'm sure that this ginormous Kirschtorte tasted fantastic, but we didn't stick around for the cutting/distributing ceremony. Apparently a 4 meter diameter cake works out to be 3,300 pieces!

They won't find out if they achieved their world record status for a while. When I find out, I'll let you know!

Today's poem is my simplified approach to baking a cake. A bit of a juxtaposition to the hoopla we witnessed in the mall.

What's your favorite flavor of cake? Let me know in the comments!🍰
Labels: Bridget Magee, children's poetry, Kirschtorte, Now THAT Takes the Cake