First of all, hello again from Switzerland! We are alive and well, but incredibly busy as of late, hence my blog post lag. Things should be settling out going forward and I plan to resume my regular blogging, with a surprise feature coming this fall. Stay tuned. 😀 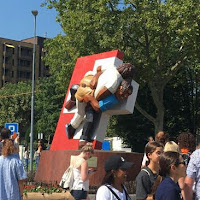 Basically, Eidgenössische Schwing it is the Olympics of Swiss Wrestling.  Every three years a village hosts the event and the people come in droves. Zug hasn't hosted since 1961, so having it this year was a BIG deal.

The location of the festivities was near where we lived in the corporate apartment. I ran through these fields last year:

This year, for this event, the fields were transformed to look like this:


They actually built the world's largest temporary stadium (no joke) for this 3-day event. It held 56,500 lucky ticket-holding fans. We weren't among them. We actually watched on a Jumbo-tron in another temporary stadium set up outside the hockey arena (a kilometer or so away) of the local hockey team that I've mentioned on my blog before.


We even got to see some yodeling action.


So what, you might be asking, is Swiss wrestling? Well, it all starts with the pants.

The wrestlers, men only, wear trousers with these shorts (diapers?)  made of jute worn over them. The objective is to lift your opponent off his feet and pin him on his back on the ground, all the while keeping a firm grip on his shorts. The winner is chosen by a three-person jury.

The winner gets the title of Schwingerkönig (Wrestling King), leaf wreath "crown", and a bull. Yep, the animal.

This year's competition was an upset. The local favorite, 22-year-old Joel Wicki was beat in 40 seconds by a 34-year-old wrestler from Bern, Christian Stucki. At 34, Stucki is the oldest winner in history.


Maybe Wicki had too much pressure on him?

Incidentally, these shirts are Edelweiss shirts worn by the competitors and 80% of the Swiss population that weekend. At 80 CHF  a pop, that's a lot of national pride.

But, wrestling is not the only event that took place during that weekend. We also attended a Boulder Throwing competition. We watched guys throw 40kg boulders from a stand.

And there was plenty of food and drink and people watching to keep you entertained as well.


Yesterday, a few weeks after the event, this is what the stadium looks like now:
Again, we feel very fortunate to live here and get to participate in these amazing cultural experiences.