In fact, I'm not a morsel of any kind, tasty or otherwise. See? 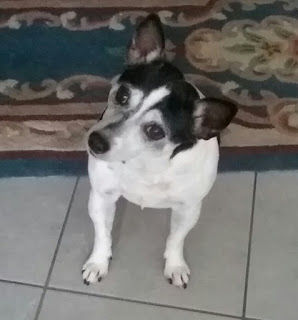 My humans often tell me how much I stink, which leads me to believe I wouldn't taste very good. But that message hasn't translated to certain other dogs.

It has happened three times in my life. The first time was by my cousin, Sheeba (may she RIP). 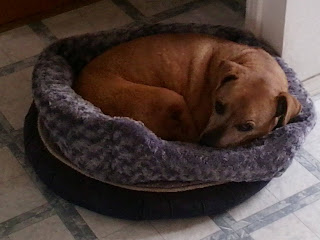 It was a bit of a territory misunderstanding. After the altercation, I healed. And we kept our distance.

Come to think of it, the second time it happened it was a territory misunderstanding, too. With my other cousin, Mucca (may she RIP, as well). In the spirit of full disclosure, I bit her, too. 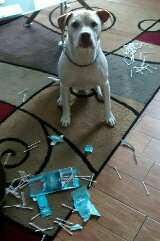 Hmm, I seem to have extended pack issues, but that is a subject I'll have to explore in another blog post. After that altercation, I healed. And we kept our distance.

Anyway, I will be the first to admit that I can be a bit of a...you know, 'female dog' (which I am, of course)...about territory disputes.  But the third time I got bit by a Pit Bull it was not about territory. And I was not being a 'female dog' about anything. And it just happened two days ago.

This is what went down...So mom, dad, Maureen, and I went out for a walk. I was having the best time. Smells. So many smells.

We went up a path past some cows and their famous pies. Them pies smell soooo good. 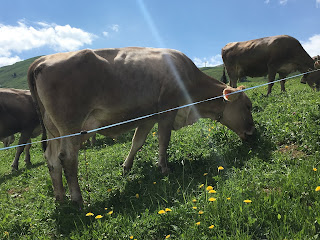 Then down a road past a cherry orchard. I think the farmer just fertilized. Oh, yeah, I love me some fertilizer. 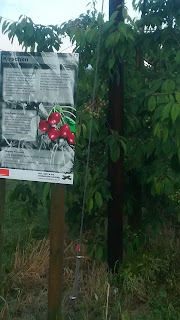 Then up a path into a forested area. Animals live in forests, lots of interesting animals...and their smells! 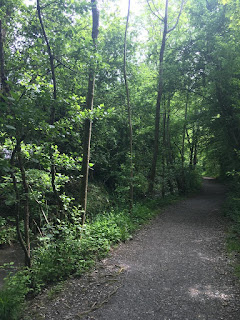 We were walking along and I was enjoying the smells when up ahead we saw a group of humans. With a Pit Bull dog. Off. Leash.

Now when we see dogs off-leash, ANY dogs off-leash, we either turn around and go another way, or dad picks me up, or whoever is at the other end of my leash reels me in and we walk past fast. Super fast. No matter how "friendly" or "well behaved" other dogs are, I know from experience that they are animals and can be unpredictable.

So the other day we decided to walk past the group of humans super fast. Mr. Pit Bull growled and lunged as we scurried by, but he was being restrained by a large man with a beer bottle in one hand and that menacing dog's collar in the other. I did a little yip, but I actually was quite civil. I had been walking a while, so I didn't have much energy to get all uppity (if you know what I mean) about things.

We were a good 50 yards past the group of people when all of a sudden Mr. Pit Bull breaks free of his owner's grip. I heard a sharp, "Nein!" then the dog was on me. Literally ON me.

And dad tried to pull me out of Mr. Pit Bull's mouth.

I ended up spinning around by my harness a few times while the dog repeatedly bit down on my side, butt, and tail. After what felt like forever, the man with the beer appeared and grabbed Mr. Pit Bull and repeated the the phrases, "Es tut mir leid. Die Hunden spielen." *I'm sorry. The dogs are playing.

While. Standing. Three. Feet. Away. From. ME.

I cried. And cried and cried. I was shaking. I was hurting. And there was spit on my butt!

Maureen kept yelling, "Move your dog!"
He ignored her, too.

I think dad spoke his broken German with the guy, but I'm not sure what was said. In between my whimpers all I could hear was that dog growling, "I'm gonna get you." I was scared.

Eventually we hobbled home. I was shakey for the rest of the evening. And when I woke up the next morning. Oh. My. Goodness. I hurt. Bad.

Off to the vet for a shot of pain medication. Then a prescription for pain pills. She said I had severe bruising, but my hind quarters are still intact. So there's that.

If only humans would keep their dogs on-leash. For being such a rule bound society, the Swiss don't follow that particular rule even when there are signs that clearly say that they should. And I can't even read! 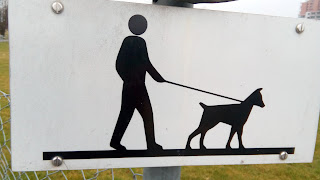 Unfortunately Pit Bulls are not the only animals that like to put me in their mouth. I once was carried by the neck in the mouth of a coyote. That. Was. Not. Fun. Luckily, Colleen heard me and scared the coyote away. Amazingly, no puncture wounds, just coyote spit all over my fur. Predators and their spit - sheesh!

I've had some near misses with snakes, scorpions, bees, allergies, electric fences, and other dogs off-leash. I'm done with close encounters of the scary kind. I just want to lay low and live peacefully. Is that too much to ask? 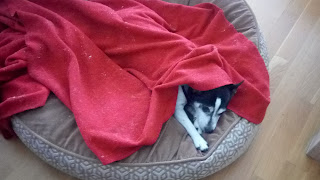 Today's poem is my hope for my future:

retire
pause
put up my paws

stress free
retirement
from all excitement