In the U.S. I have seen metal shopping carts in lots of places other than grocery stores or grocery store parking lots. I've seen them abandoned in river beds (dry and flowing), along streets and freeways and in random neighborhoods.


Here in Switzerland, and in much of Europe, they don't have the problems associated with shopping carts wandering off. Here you "rent" the cart for your shopping trip. 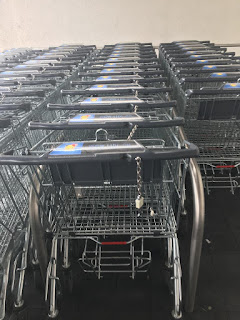 Each cart is 'chained' to the one in front of it. Put in your coin, in Switzerland 1CHF (equivalent to ~1USD), and your cart is free to wheel around the store. 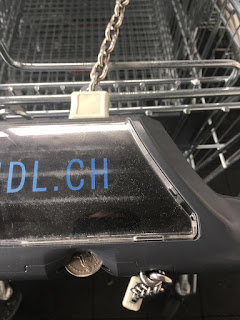 When you return it, you get your 1CHF back.


With every shopper 'investing' in its use, carts don't normally end up where they don't belong.

Another feature that European shopping carts have that I have never encountered in the U.S. is that these carts 'free wheel' - literally. Most of us have used shopping carts that have two fixed wheels in the rear with two unfixed wheels for steering in the front. Well, here all four wheels are unfixed - moving independent of each other. (And at times, independent of the person pushing it as well!) It has taken some getting used to to 'drive' one of these carts.

Sometimes, I expect to hear, Look out on Aisle 3, Bridget is at the handle! over the loud speaker in the store. But of course it would be in German. 😉

There is no way today's poem can top that awesomeness, but I'll give it a spin anyway. (See what I did there?)

Actually, today's poem is not 'free wheeling' in the mechanical sense, it is more of an insight into a toddler's dizzying logic. (As a side note, toddler logic is universal. I've seen this scene play out in Swiss grocery stores, the 'players' just happen to be speaking German...or French...or Italian...)

I ride in the shopping cart
because Mom makes me.
But I have a plan.

I start to point
and whine,
"Can I have that, pleeeeease?"

"That's enough!"
Mom swoops me out of the cart.
"You're holding my hand now."

Which is what I wanted all along.
©2019, Bridget Magee. All Rights Reserved.
Labels: Bridget Magee, children's poetry, Free Wheeling, shopping cart, You Spin Me Round