When the Kid was Away...

...the parents did play.

So Maureen had a coding workshop at Google in Zurich over the weekend.

And while she worked all weekend, Joe and I played. Even though Zurich is only about an hour away from our house by train, we rarely spend time there other than to go to/from the airport or meet up with visitors for an afternoon. Since Maureen had to be at her workshop all day on both Saturday and Sunday, Joe and I decided to make a vacation out of our visit. We got a dog sitter for Smidgey, rented an Airbnb in the heart of the city, and wandered around Zurich (in the rain and cold!) looking for the off beat. And we found it.

First off, Zurich has A LOT of restaurants. Most are way out of our price range (not hard to do as Zurich is the second most expensive city in the world, only outranked by Singapore) but many have some clever names. Reading signs is free. Here is a sampling of the wordplay and creative spelling we discovered while checking out the city:


Then, being atypical tourist types (technically semi locals) we looked up weird and off-the-beaten-path attractions in Zurich. And we found some interesting stuff.

For example, we visited a public park that was created from an old machine factory called MFO Park. On the site a 100+ year old factory used to stand. Now the frame of the factory is visible with multiple vine trellises growing every which way. 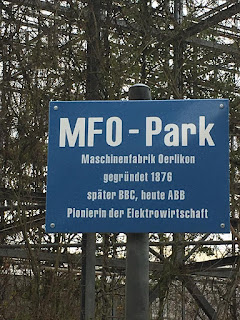 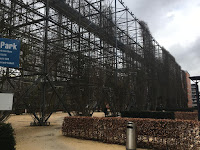 You can go inside and walk around. In fact, it has four different levels... 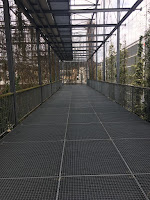 Unfortunately, it is still winter, so the vines are not completely filled out and the building is not completely covered like it will be in the spring/summer. But for a split second we did get a splash of sunshine on some vines:

Mostly the weekend was cold, wet and miserable:
But rather than complain and hide from the rain, we sought out more rainy day reminders. In fact, one train stop away from the park there is a restaurant that has a famous canopy of umbrellas that you can dine under: 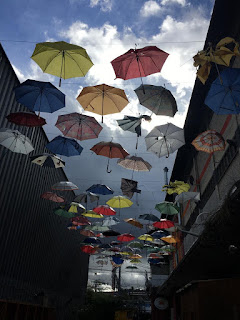 But, being that it was a Sunday in Switzerland, the restaurant was of course closed. Classic. :(

Then down the street we found an interesting urban garden/shopping/cafe complex that is being constructed out of shipping containers. 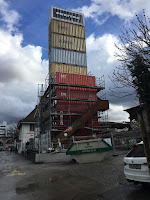 Last, but not least, we found an odd, popup flea market. While walking along in the neighborhood where our Airbnb was, we stumbled upon some spray painted signs:

And being the people we are, we walked into a weird old building where we found...


We walked through the hallway until we entered an enormous warehouse where we found a huge eclectic collection of stuff - all for sale:


Upon leaving the warehouse things got really, really weird. In front of a surf shop - which is pretty weird in and of its self considering it is in landlocked Switzerland - we noticed something spray painted on the sidewalk. Actually there were many of this "thing" painted along the sidewalk creating a trail that covered 2 city blocks.

Unfortunately, I can not describe what was painted on the sidewalk here, except to say that it is not suitable for a children's blog. If you email me direct I will tell you about this funny, albeit really weird, discovery (with pictures!) How's that for piquing your interest?

I highly recommend Zurich as a destination, but please look around. There is a lot happening off-the-beaten path that can make for a great adventure.

©2019, Bridget Magee. All Rights Reserved.
Labels: Bridget Magee, children's poetry, off beat, weird, When the Kid was Away...