Sick of Being Sick

I apologize for not posting last week. I was sick.

I was sick the week before that.

And the week before that.

And the week before that.

I've basically blown my nose everyday since the week before Thanksgiving. (I apologize to the trees I have destroyed as a result of my tissue use.)

Last week I was particularly sick (and tired of being sick).

Granted, I work in a Petri dish...uh, I mean classroom. 6 year olds are walking, talking germ factories. And this is a new set of germs in a new country. I get it. I have to recalibrate my immune system. But almost 3 months of non-stop illness? Really?

Don't worry, I haven't been going it alone. I've been to the doctor. Three. Times.

The first time we were in the United States for the holidays and I was diagnosed with bronchitis and an ear infection. Fun. Got some antibiotics and my condition improved, but I never really got completely better.

A few more weeks of coughing and congestion led me to make appointment number two with a Swiss doctor. I was told that since I already had antibiotics, he could only give me homeopathic remedies. Again, my condition slightly improved, but I definitely was not better.

More weeks passed, and I was feeling really, really bad. My ears were clogged. My sinuses were stuffed. I couldn't smell or taste. I was exhausted. Last Thursday I had doctor's appointment number three with the same Swiss doctor. He took my temperature. Looked in my ears and throat. And listened to my lungs. He commented that I sounded bad, but nothing he checked looked "that bad". How about the fact that I've been sick for almost 3 months?! Finally he said that he'd give me a blood test. I got the distinct feeling he wanted to blow me off as hysterical, but decided to placate me with this blood test.

When the results came back a few minutes later he called me into his office with a stricken look on his face. Apparently whatever he was measuring, my CRP (?), was off the charts. It is supposed to be in the 0-5 mg/L range and mine was 44 mg/L. Yeah, I was sick. He immediately said I needed antibiotics for a "severe sinus infection" and that I was forbidden from going back to work until Wednesday. Yep, he used the word forbidden and I got a doctor's note on the spot. 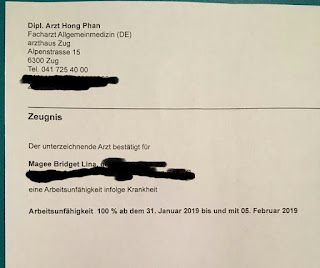 I'm happy to say that after just a couple of days I am feeling MUCH better. I can smell! I can taste! I'm not completely out of the woods, but the trees are breathing a sigh of relief that I don't need as many tissues.

But I'm sad to say that I missed my weekend in Paris. Yep, we were scheduled to fly to Paris and attend our niece Nicole's performance in the Festival Mondial du Cirque de Demain (with Nicole's mum and dad and other amazing circus folk). 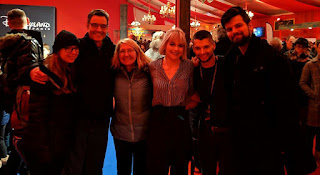 Joe shot a really cool video of  Nicole and her partner, Guillaume's, performance, but in order to remain in compliance with the music copyrights, I can't show it to you here. But, here is blurb about their performance:


Guillaume Paquin and Nicole Faubert
Straps
Canada / USA
Graduated from the Montreal National Circus School, Guillaume Paquin and Nicole Faubert have created this number based on quicksilver, a shiny silver metal, the only one to be liquid under normal conditions of temperature and pressure. This straps duet is led by the idea of embodying a material by going away from the classic technical codes: Nicole is a high-wire walker and an acrobat, as for Guillaume he is a tightrope walker and an acro-dancer. Their costumes have been created by Sandra Chirico and they work on Remembrance, Balmorhea, Remix by Machinefabriek, Mix by Kyle Cragle.

And if you have some time on your hands (like recovering from an illness) and are interested, here is a playback of the live stream of the whole show. Worth the watch!

Oh my, I'm so sorry, Bridget, but glad there is some relief coming. At least the doctor "finally" understood you weren't making things up! So sorry you missed the performance. Wow, your niece is a high-wire artist! I will try to come back to see it! Hope this week finds you better! And yes, getting back into a school means the immune system has to change. I've seen new teachers get sick a lot through my years in school. It does get better! Best wishes for full recovery!

Hope you're on the road to recovery soon! Looked a little chilly in Paree - Joe and Mo should have put gilets jaunes on!

Oh no! I'm so very sorry you've been feeling so sick. I'm glad you finally got that doctor's attention and the treatment you need. Feel better!

We are sorry that your illness continues, Bridget, and that you missed the Parisian adventure. We hope that you fully recover soon. Thank you for the link to the performance.

Thank you, Linda! Feeling much better. I appreciate your well wishes. And yes, Nicole, is amazing.

Thanks, Dave! Yes, feeling much better after several days off. And neither Joe nor Mo know what those are, but Joe was proud that he even wore pants! ;)

Thanks, Liz! Yes, I am properly on the mend and happy to not be feeling so crummy. Nice notes like these help.

Thank you, Joan! I'm bummed I missed seeing Nicole and the whole show live, but the recorded performance was amazing.

I hope you are feeling better!

I am! Finally! Thanks for your well wishes. =)