We live in the German speaking part of Switzerland. Since arriving, we've been taking German lessons, but what is taught at the language schools is High German, not Swiss German. (Schweizerdeutsch) You may be asking yourself, why?

Well, Swiss German is a dialect of German and is the spoken everyday language for the majority of people living in the German speaking areas of Switzerland. Unfortunately Swiss German is very different than High German. In fact, it is almost unintelligible to High German speakers (ie: Germans)! Swiss schools teach in High German, but all other interactions are in Swiss German, therefore the population is fluent in both.

Being an English speaker, hearing both High German and Swiss German can be doubly confusing. (Add to that my chronic confusion with English and you will know why it is so hard being me.😏)
But with about a year and a half of living in Switzerland under our belt, we've learned some common key Swiss words to fit in (Ha!)

Grüezi which means hello or Grüezi mitenand means hello to more than one person (think y'all).

In High German they mainly say Guten Tag or Hallo.

In High German it is simply Guten Appetit.

And finally, when in a Swiss Bakery (Bäckerei) and you want a croissant, ask for a Gipfeli! The reason the Swiss call this particular baked good Gipfeli is because gipfel means peak in German - as in a mountain (Alps anyone?)

And because a croissant has two peaks, they use the plural "Gipfeli"!

After looking at the Alps, it all makes sense: 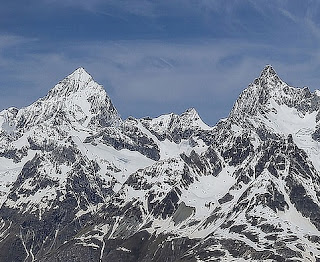 And makes me want a Gipfeli!

Oh, I do admire you to figure out all the languages you are encountering. Yet, I see you've made the priorities & learning 'gipfeli' is just perfect. I love them, too!

That sounds incredibly confusing! I would be lost. But it does seem you are learning the most important words. : )

I absolutely love this poem. I'm running out to a bakery right now for some buttery Gipfeli!

Thank you, Linda! I'd love to share a gipfeli with you! =)

Love the poem. Mark likes it too. I read it aloud on the way to church and now I'm thinking about my love for baked goods.

Thanks, Jeanette! Let's share a 'gipfeli' in Prague in June!