In previous posts I have mentioned the local professional ice hockey team, the EVZ. I pretty much thought ice hockey was king here in Zug, but apparently I was wrong.

This past weekend we unexpectedly  stumbled upon an immensely popular, but unknown (to us) spectator sport here in Zug: Street Hockey!

Not kids in the street hitting a puck back and forth street hockey, but full-on grown men in uniforms playing hockey in an outdoor arena: 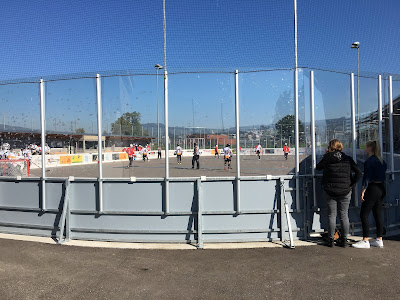 The main difference I noticed in the game, besides the obvious lack of ice, is that the guys don't wear skates, ice or roller - they play in their tennis shoes!

Their arena is pretty sizable, too:

Apparently Street Hockey is serious business here in Zug as the stands of the arena were filled (we were too embarrassed to take a picture of the crowd) and the play was competitive.The local team is the Sika (a company sponsor) Rebells. They are even hosting the 2018 World Championship* of Street Hockey here on November 3!

*It seems World Championship in this case might be a little Swiss-centric since all the teams are from Switzerland. But, hey, it is still pretty exciting!

Today's poem is actually a joke:
Q: What do you call a street hockey player?
A: No More Mr. Ice Guy!

That sounds interesting and fun. Like speed soccer with s puck.

Exactly what we thought, Jeanette! It was an action packed game. Thanks for reading/commenting!