Sorry I've been away from the blog for a week, but we went to Prague last weekend to meet up with some very important people that we've missed: 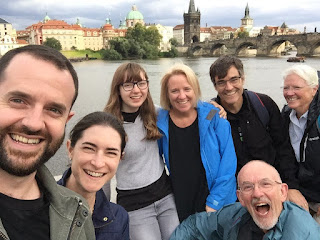 But these are not the missing persons that I am referring to in my post title.

No, our mystery began after the above family members left town and Joe, Mo, and I were left to our devices for a day. After a quick Google search, Joe discovered that the Žižkov Television Tower in downtown Prague is a functional television tower that has an art installation (babies!) attached to it. Yes, please!

A quick trip on the Czech WAY underground subway system...

According to Wikipedia, "The structure of the tower is unconventional, based on a triangle whose corners are growing up in steel columns, consisting of three tubes with a double steel wall, filled with concrete. They support nine 'pods' and three decks for transmitting equipment. One of the three pillars extends considerably higher than the others, and this provides both the necessary height for some antennas, along with the structure's rocket and gantry appearance. The tower stands 216 metres (709 feet) high, altitude of the observatory is 93 m, the hotel room* altitude is 70 m, restaurants altitude is 66 m, with a capacity of 180 people. Three elevators transport passengers at a speed of 4 m/s. "
*ONE hotel room!

But where are the babies??? Google promised us babies crawling up the tower!

"In 2000, ten fiberglass sculptures (3.5 m long, 2.6 m wide, and weigh approximately 150 kg) by Czech artist David Černý called "Miminka" (Babies), crawling up and down were temporarily attached to the tower's pillars. The sculptures were admired by many and were returned in 2001 as a permanent installation."

On the observation deck we saw a model of the tower we were standing in with the babies:

But in real life there were NO babies!

Apparently, for cleaning and structural checks, these Babies were removed from the tower in the fall of 2017, and they were scheduled to return to the tower in the spring of 2018, but they haven't been returned as of August 2018! Boo hoo!

Then we read that three replica babies (made of bronze, though) were located in Kampa Park. So off we went in search of the missing babies. After another subway ride and a long walk along the Vltava River we FINALLY found the missing babies:

They were pretty awesome except for their faces...Mo was VERY disturbed by the "faces"...or lack there of: 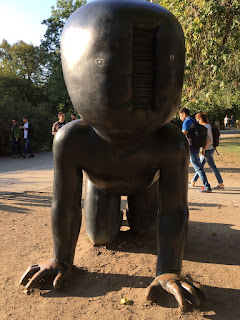 Our missing persons search ended up giving us a "baby steps" tour of Prague.

Hey, we found those babies in 2013, and one of the babies came to Sculpture by the Sea Cottesloe (Perth) a few years ago; so halfway around the world again.

I'm with Maureen. Those baby, non-faces are FREAKY! Definitely worth experiencing the horror so we could spend some time with all of those happy people though :). And hear hear to your poem, especially that last line.

Perhaps no face because they were so far up? They are huge, amazing. I love your treking to other places, like my own travelogue, Bridget. The poem is wonderful, makes me start thinking of other things missing & the rhyming-spot on! Because of what I wrote today, I'll add "I am the list without a to-do!" Happy weekend!

Lucky you, Marian! I think the idea of babies crawling up the tower is fabulous, but the artist lost me with the depiction of the faces. Next time we visit Prague, I hope they are back where they belong - high above the city. Thanks for commenting! =)

Thanks, Joe! It was fun going on the baby hunt with you. =)

Yes, your addition to my poem fits perfectly, Linda - great minds think alike. Thanks for joining me on my adventures, too. =)

What I wonder is why the feet and toes are so detailed but the faces are not...maybe the artist just isn't good at faces...

Yeah, we wondered the same thing. Or maybe it some kind of commentary on society/politics that we don't understand. Art is confusing at times... =)