Stray Cat Struts Where Ever He Wants To 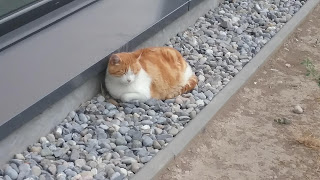 Today's poem shows what I would imagine the progression would be for a cat to go from a stray cat to a stay (at home) cat:
Wander cat,
squander cat,
hiding where we launder cat.

Sticky cat,
licky cat,
got into something icky cat.

Huggy cat,
snuggy cat,
she's getting to be a pudgy cat.

Email ThisBlogThis!Share to TwitterShare to FacebookShare to Pinterest
Labels: Bridget Magee, children's poetry, Stray Cat Struts Where Ever He Wants To

In and around Zug there are:

With all this corn growing, where is the corn in the grocery store? I'm corn·fused!


The corn being grown in and around Zug is known as 'field corn' (duh?) and they do sell some of it in the stores, but I've been warned to steer clear of eating it because it tastes bitter.

Apparently it is NOTHING like the kind of corn we are used to in US which is sweet corn (Zuckermais). Swiss farmers do grow sweet corn, but it is only about 1% of their yield and it is hit or miss if you can find any in your local grocery store.

So who gets to eat all that corn I see on my daily runs?

Yep! The farmers use all that corn as silage for these gals for the winter. Gotta keep the cows happy so we have plenty of milk, cheese, and of course, chocolate!

Today's poem is actually a corny joke, but there may be a kernel of truth here:
Q: Why couldn't the corn
hear the farmer's tractor?
A: Because it got a kernel
stuck in its ear.
©2018, Bridget Magee. All Rights Reserved.
Posted by Bridget Magee at 12:00:00 AM 4 comments:

This past weekend we visited the town of Hergiswil, Switzerland.

There we toured the Glass Museum: 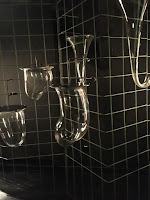 Watched the men on the factory floor making a sectioned plate:
That can be found in their catalog:


And we blew glass! Joe, Maureen and I got to make our own glass ball ornaments - so cool! (Actually it was quite warm in there.😉)

Joe's glass ball turned out the best of all three of ours. Maybe because he is full of hot air? Nah, that couldn't be why! He also chose to create one with grooves in the design:
In order to get the 'grooves' imprinted into the glass, the craftsman inserted it into a mold before Joe blew it out:

Maureen and my glass balls didn't turn out so bad either:

Plus the camera caught my funny face as I blew:


Outside the factory there were some amazing sights as well:

It was a glass half-full kind of day. Hopefully you feel the same way after you read my poem:
from the belly of the oven
come works of art
clearly

We finally went to the movies here in Switzerland. Rumors of high ticket prices, the uncertainty about what language the movie would be shown in, the ability to stream movies at home coupled with there not being many movies that seemed 'worth it'  has caused us to wait almost a year to see a movie in a movie theater. Then Ocean's 8 came out and Maureen REALLY wanted to see it, so we went. (As an aside, when a movie opens in the US, it usually opens here at the same time.)

We bought our tickets:

The guy pointed upstairs so we knew which way to go to get to our theater. Once inside, we found some seats and waited for the movie to start.

The first difference we noticed from going to the movies in the US is that there are NO previews. The lights dim and the movie starts...ON TIME.
And just so you know, the movie was in English with German and French subtitles. I actually looked this up ahead of time and saw that every showtime has the languages listed. So for our show it was listed: Edf (capital E for language of movie, in this case English, lower case d and f for language(s) of subtitles, in this case Deutsch  and French).

So we're watching Ocean's 8 - enjoying Sandra Bullock's master mind and Mindy Kaling's jeweler skills when the movie stopped. Boom! Right in the middle of an action scene, the film turns off, the lights go up, and ads start to flash on the screen. We were like, what the what? Then we realized...INTERMISSION!

After the movie, we walked home talking about James Cordon's role and Rhianna's dress, happy with our first successful outing to a movie theater. Then the next morning I took a really good look at the movie ticket. I was shocked to realize there was a ROW number:

And a SEAT number:

It even tells you which door to enter the theater through:

We entered on the RIGHT side of the theater, sat in the 20th row, in seats 6, 7, and 8 (got the seats right!). It is no wonder why those people were staring at us - we were sitting in the wrong seats! Who would have thought that they have assigned seats in a movie theater - the Swiss, of course! Now we know for next time...in 2019?

Today's poem was inspired by that night:
trilingual movie
with an intermission
sitting in wrong seats
nearly an inquisition

Canton Zug, is known for many things: favorable tax laws, Blockchain/Bitcoin hub, and for cherries. Yes, the small, red, tangy fruit is a big deal in Zug.

So much so that they have a huge, 200 year old, traditional festival, complete with the 'Chriesisturm' or Cherry Race. 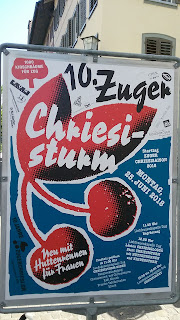 To mark the beginning of cherry season in Zug the 'Chriesigloggä' (cherry bell) of St. Michael's Church peals at noon on the last Monday in June and then locals run a race through 'Altstadt' (old town) carrying 8.1-meter long ladders:


Women run the race, too, but without the ladders. They run with a basket strapped to their back: 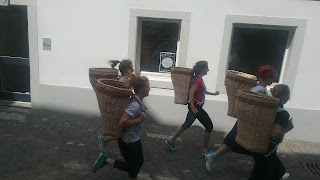 And kids from the local elementary school take part as well:


The winners of the races don't receive anything other than bragging rights. But it is big fun to be in a huge crowd shouting "Hopp! Hopp! Hopp!" (Go! Go! Go!) as the runners go by. And for being a Monday at noon, the crowd was big:

Things culminate with a large lunch for the participants and a cherry farmers market for the public by Lake Zug:

But the best part for our family is:

Today's poem is meant to be sweet, but may be the pits, depending on the reader:
cherry season
is the reason
for the ladder race