Every country has an abbreviation.

Some make perfect sense:
the United States is US or USA
France is FR or FRA
and Canada is CA or CAN.

Some sort of make sense when you think about it:
United Kingdom is GB or GBR for Great Britain.
(But UK is used informally.)

Germany is DE or DEU for Deutschland, which is what the word Germany is in German.

And then there are some that make no sense at all...until you learn a little history:

You would think the country code for Switzerland would be SW or SZ, but a version of both of these is being used for other countries:
Sweden (SE or SWE)
and Swaziland (SZ or SWZ).

What the CH? Why CH when there is neither a C nor an H in Switzerland. (Actually, Switzerland in German is Schweiz, which has both a C and an H, but that is not the reason.)

The real reason Switzerland uses CH is it stands for Confoederatio Helvetica, the Latin version of "Swiss Confederation". The founding of the Swiss Confederation traditionally dates to 1 August 1291 and is celebrated annually as Swiss National Day (August 1). The modern day Swiss Confederation is made up of 26 cantons, with Bern as the federal city (capital).

CH is also used in reference to and on Swiss currency. For example, the apple costs 5CHF or 5 Swiss Francs. (A little bit of an exaggeration, but not much. ;)

And Confoederatio Helvetica is featured on the 5CHF coin: 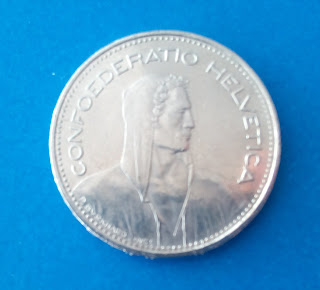 So when you send a letter abroad to Switzerland you have to add and underlined CH to the address so it lands in the right country and the right mailbox.


Today's poem is all the ways Switzerland is CH:
Climb
Hike