Moving to Switzerland hasn't been without its downsides.
Missing those you love: 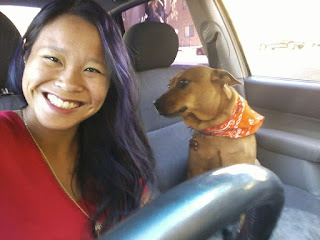 Trying to understand the language around you:

And the general lack of cultural familiarity and comfortability.

I am not trying to complain about my experience, but I do struggle at times. Switzerland is not the easiest place to connect with people. Here is an article from the online newspaper swissinfo.ch. Basically it states, "The Swiss are friendly, but are not actually looking for friends." This has pretty much been my experience. That is not to say that I have not met some very nice Swiss people and other expats from all over the world, but so far none of these acquaintances have blossomed into real friendships. But that is OK because I am keeping busy learning how to speak German, getting my TEFL certification, and of course, writing. Besides all my wife/mom duties.

This week has been an especially mixed bag of emotions for me. You could say there was the Good, the Mixed Feelings, and the Horrifying.

First the GOOD:
I received the best email a writer could ever receive. A woman living in Saudi Arabia read a story I wrote for Chicken Soup for the Soul: Inspiration for Teachers and liked it. In fact she liked it so much she went out of her way to send me an email telling me what my words meant to her. Swoon.


Second the MIXED FEELINGS:
On Monday I was walking through the Bahnhof when a man with a camera stopped me and asked me something in German. I responded to him the way I normally do when someone speaks to me in German, "Es tut mir leid. Ich spreche nur ein bisschen Deutsch." (I'm sorry. I only speak a little German.) He immediately switched to English and asked if I wanted to take part in an informal  poll being run by the local newspaper. "Uh, um, I can't vote here," was the first thing out of my mouth. He assured me that it had nothing to do with politics so I reluctantly said OK. I felt very uncomfortable and exposed. (Kind of how I feel writing this post.)
He asked me if I had heard about an auction that the Canton of Zug held to sell the "Zug 10" license plate and how the winning bid was CHF 233,000. I had heard about it because I had read this article. Then he went on to ask if I would ever pay that much for a license plate. I answered...in English. Then the article came out:

Here it is the German version a little bigger: Here is the translation: 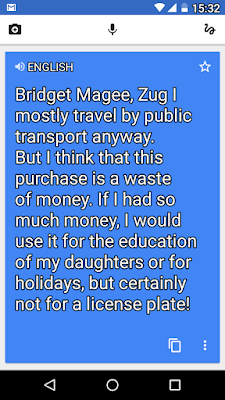 My answer was mostly in line with the other respondents, but they said it more eloquently Swiss: along the lines of it's their money and they can do what they want with it  and I don't want somebody telling me how to spend my money. Overall, as a fairly new American expat I felt weird about commenting on local current events, but I was grateful the reporter translated my answer into German and that he didn't expose me as an American. (Being American here is a mixed bag, too.)

Finally the HORRIFYING:
So I went to the grocery store on Tuesday. (One of three trips this week.) I was in the produce section choosing some lovely Mandarin Oranges: 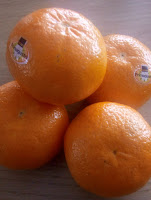 I plunked a few into my plastic sack and then started to walk away. Suddenly there was a noise behind me. All of the oranges in the lower part of the display slid off the shelf and onto the floor! I'm talking 50 to 75 oranges rolling around the produce section with me standing next to them with a sack of the same oranges in my hand. I was horrified!


Luckily, there were two of the NICEST Swiss people EVER who helped me pick up all the oranges. They said several things in Swiss German to me, but with kind smiles on their faces. I was in too much shock to give my normal German response (see above) so instead I smiled back weakly and repeated, "Danke" about 50 times.

Today's poem is how I felt in the produce section:
the gravity of
my humiliation
came to FRUITion