I've mentioned our local professional hockey team, EVZ, on this blog before: in relation to the citywide bull art installment and when we followed the trail of bloody footprints. Today's post is about the EVZ Effect on daily life in Zug...and on opposing fans.

EVZ is BIG in Zug. Think rabid Raiders-type fans all supporting the only professional sports team in an area about the size of Topeka, Kansas. The entire community really supports the EVZ. So much so that the SBB, the countrywide transportation system, converted a regular bus into a rolling billboard. 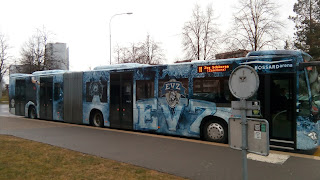 Now, wrapping buses is nothing new, I know. But they not only wrapped the outside of the bus, they also converted the inside of the bus into a shrine for this hockey team.
There are player pictures above the windows: 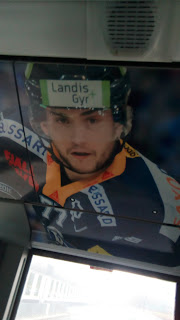 And covering the walls: 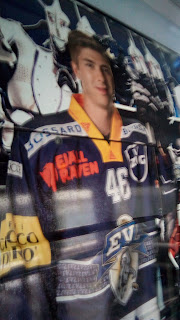 This is not a bus that only runs on game days or during the season. Nope, this bus is on the streets everyday, year round. Zug loves the EVZ.

But the opposing hockey team's fans don't. In my post about the bloody footprints, I told you about an altercation between EVZ fans and fans of an opposing hockey team (Geneva) at a cafe near our home. Well, it happened again...but without the bloody footprints (we think). After an EVZ game Saturday night some fans from Zurich got rowdy again...and did some major damage.

I tried to encapsulate the EVZ Effect in today's poem:
A rolling 'rink'
adverts a team
known for scoring goals.