Last Sunday morning started like every other day...walking Smidgey.🐶  Joe, Smidge, and I ventured out into the cool air and quiet neighborhoods of Zug. (Maureen slept in😌💤 )

Our stroll was much the same as it always is - constant surveillance for other dogs either walking on or off-leash, constant vigilance to keep Smidgey from eating 'sidewalk snacks' that always make her sick, and constant hope that this Smidgey-poo pile will be the last for the day. (It never is.)
But about halfway through our walk we noticed some footprints on the sidewalk...bloody footprints!😱

Being the inquisitive sort that we are, we followed the bloody footprints for TWO and a half blocks!

We discovered where they started:
Then we followed them... 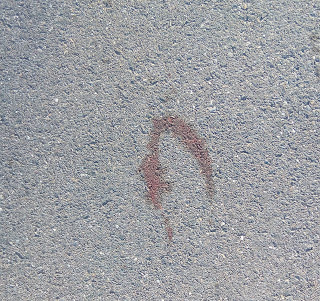 ...and followed them, as the blood splatter... 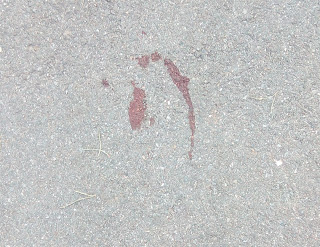 ...got messier and messier.

We followed the footprints until it led us to this bloody mess... 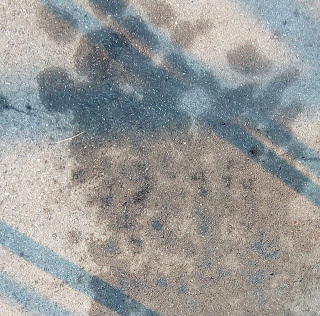 ...which is right outside the ice hockey arena where the professional hockey team plays!

As concerned humans, we were worried about this poor person who must have lost a lot of blood to leave so many footprints for such a long distance. As critical thinkers, we wondered why anyone would go so far and not seek or receive medical attention for an obvious trauma. And as amateur forensic detectives, Joe and I tried to figure out the scenario of what might have happened: A hit and run? A stabbing?  A really bad nose bleed?

The mystery haunted us for a few days until I saw this article in the Zug Post - the English daily local news online. Apparently there was a fight between rival ice hockey fans at the café around the corner from our apartment - and exactly across the street from where we found the first drops of blood! Part of the melee was described by the restaurant worker as raucous fans "...kicking seats over, causing glasses and ashtrays to get broken." Though the article doesn't mention the bloody footprints and the hockey team spokesperson basically downplays the violence, CSI Joe and I found it to be consistent with someone (possibly drunk?) getting injured during the fight and bleeding all over the sidewalk as they walked to the arena to watch the hockey game (and hopefully receive medical treatment).

Who'd have thought we'd find such mystery and intrigue in our tiny neighborhood in Switzerland?