With two world leaders boasting publicly about the size of their 'buttons', the notion of nuclear contamination has come to the forefront of many people's minds, and not just in the US or Asia.

The Swiss have been thinking about nuclear contamination and how to protect their population for a LONG time. They pride themselves on their "defensive neutrality" - protecting themselves against everything and everyone.

One way in which they ensure their population is protected against nuclear fallout is the law (inspired by the Cold War) that require every building built after 1963 "be equipped with a shelter against atomic attack". That means they must be equipped with "a thick armored door and a ventilation system with an anti-gas filter."

The Swiss Federal Law on Civil Protection states: "Every inhabitant must have a protected place that can be reached quickly from his place of residence" and "apartment block owners are required to construct and fit out shelters in all new dwellings".

There is actually a way around this law because it can be prohibitively expensive to private builders. If a home builder decides against building one, "they must instead pay their commune CHF1,500+ for each place in a shelter, calculated at two places for every three rooms."

Of course, people are allowed to use shelters "for other purposes, such as storage space, but are obliged to keep them in good order. In recent years some public shelters have been used as temporary accommodation for asylum seekers."

No matter what, there are enough underground shelters to protect the entire Swiss population (including us foreigners!). Phew!


Here is the bunker in our apartment building:

Within days of arriving in Zug we received a postcard in the mail telling us (in German!) where we can pick up our potassium iodide tablets. 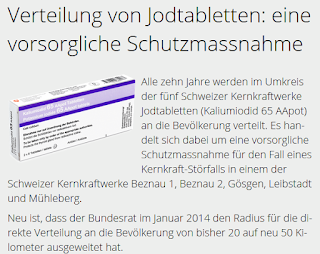 After translating the postcard, I was flabbergasted to find out why the government sent this to us. Apparently Zug is within 50km of a nuclear plant and all residents in this radius are offered the potassium iodide tablets. "If taken in time and at the appropriate dosage, it blocks the thyroid gland's uptake of radioactive iodine."

During college and after, I lived MUCH closer to a nuclear power plant and I never received potassium iodide pills. Huh, why is that?

Well, no matter what, you can say that the Swiss take care of their citizens.  But maybe that is why living in Switzerland is so expensive?

bunkers and pills
for bombs and spills
Swiss defense
at what expense?