According to the American poet, John Ciardi, honesty is "The ability to resist small temptations". From a few recent experiences I have had here in Zug, I think he must have been referring to the Swiss.

As I have mentioned in previous posts, we live very close to the Siemens corporation. As a shortcut to get to the train station or a walking path, we've been known to cut through their campus. We usually go through a parking area for Velos (bikes) and Motos (motorcycles and mopeds). Over the Christmas holiday break, this parking area was pretty empty except for a really nice helmet just hanging on a hook. Day after day we walked past this helmet with shock and wonder on who would have left it and why no one else has taken it. The reason I suppose is because we are in Switzerland - plain and simple. Now that the workforce is back at Siemens, the helmet sits next to a nice moped, ready to be worn again. 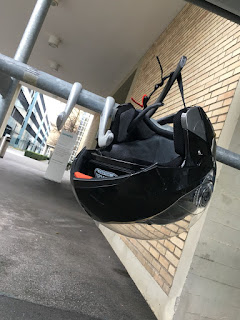 Then bright and early on New Year's morning, Smidgey was in need of a walk. (She didn't really care about the troubles we endured the night before.) As we stepped out in the early morning frosty air I spotted a very nice bike laying on its side next to the bus stop outside our apartment building. Smidge and I righted the bike and parked it against the wall at the base of the steps to our building. I chalked it up to NYE revelers finding an unlocked bike and going for a joyride then leaving it for the owner to find. Only the owner hasn't found it. As of this writing, the bike, in pristine condition, continues to be parked in a very public area with no lock.


And then last week I trip-linked my grocery shopping with my morning jog. Since I didn't want to be weighed down with my entire wallet during my run I just took some cash in my jacket pocket. As I was walking home from the store (I was no longer jogging because I was weighed down with my huge shopping bag) I pulled out my phone to check the time. A little while later, as I continued down the path, my hands started to get really cold so I stuck them in my pockets. My stomach dropped. Where there had been two pieces of paper (CHF), there was only one. I pulled the single bill out of my pocket and realized I had dropped a 50CHF note somewhere between where I was standing and the store exit - a distance that had taken me at least 15+ minutes to walk. Mumbling a 'colorful' word under my breath with every footfall, I ran back toward the store retracing my route (my huge shopping bag now thumping against my hip and back).
I passed an elderly lady, "Grüezi" she said to my blur.
Then I passed two joggers. (Neither running with a huge shopping bag banging against their body - go figure.)
Finally, I saw it. The bright green bank note laying in the middle of the path. Hallelujah!

At a minimum three people passed my money and didn't pick it up. I have no idea how many other people passed that way that I didn't see, but not one person picked up my money. Honestly, the Swiss know how to "resist small temptations". (Or big - 50CHF is nothing to sneeze at!)

Fascinating! I really like the repetition and the rhyme.

Bridget, thanks again for restoring my faith in humanity.

Thanks, Liz! I appreciate your encouragement. My poems sometimes leave something to be desired...honestly. ;)

Thanks, Jeannette! I think a lot of the social aspects of respecting other's property comes from the fact that the citizenry here are taken care of. Switzerland is great, but it is not without its challenges. Luckily theft does not seem to be one of them as far as we witnessed. =)