Over the course of the last several months I have posted about various aspects of living abroad in Switzerland. As time goes on, I sometimes see something new related to a topic I have already posted about and I think to myself, I should do a follow up on that.

Today I am following up on four previous posts:

On Friday, October 13th I wrote a post titled "Brusque Busking" about the many street performers we encounter around Zug. I mentioned that I wished I had a picture of the woman in a gold hat playing a crank organ and how Joe kept hoping a mini monkey would pop out of her hat. As luck would have it, we saw the woman's husband playing the crank organ one Saturday afternoon. But, alas, they still didn't acquire a monkey. (And his playing was no better than his wife's.) 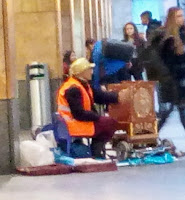 Then, a few days later, we saw a guy who took street performing to a whole new level. Painted in gold and wearing a gold suit he would stand stock still on a box. Then when an unsuspecting person(s) (usually young ladies) would walk past him, he would flinch and yell 'Boo!' which would cause the unsuspecting person(s) to shriek. And he would expect money for this. See his gold, "Donations" urn? And do you see the cigarette hanging out of his mouth? That leads me to my next follow up... 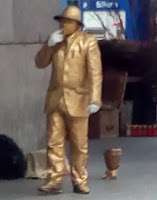 On Tuesday, September 5th I wrote a post titled "Everything Butt" about the prevalence of smoking here in Switzerland. It still astounds (and horrifies) me how much people smoke here! In fact, it seems that public spaces are set up to accommodate smokers rather than non-smokers. On every platform at the train station there is a big glass box for the NON-SMOKERS to have a place to breathe smoke free while they wait for their train. It is the opposite of how it is in the US.

On Tuesday, November 7th I wrote a post titled "Top That" about how construction sites place a tree on the top of the building that is under construction. The practice is called "topping out" and it signals that a building has reached its final height when the last beam is placed atop the structure. Well, now that the holiday season is upon us I wondered will they decorate the tree way up there? I don't need to wonder any more - they did!

And finally, on Tuesday, August 29th I wrote a post titled "State of the Art" about the abundance of public art in Zug. The construction company that is building across the street from us has gotten into the act by adding a really cool public art mural to the OSB fence that surrounds the construction and faces an apartment building. I wouldn't mind looking out at this: 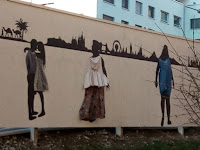 Further investigation
another loOk
Look into
Linger
check Out
Watching