🎶"Jubilation
She loves me again
I fall on the floor and I'm laughing"🎶
Lyrics from Simon and Garfunkel's song, "Cecilia" warble
off-key through the air, competing with the squeal of train brakes.

On any given day, though more often on Fridays and Saturdays, you can find street musicians performing around the Zug Bahnof. (They are not allowed inside or on the platforms.)
One day it could be a couple of guys with guitars: 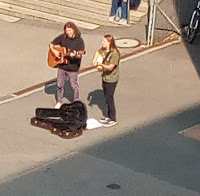 Another day it could be a ukulele/accordion duo:

And yet another day it could be a violin/accordion duo:

I wish I had a picture of the woman in a gold hat playing a crank organ. Joe kept hoping for a mini monkey to pop out of her hat.

Buskers are big in Zug, but out right begging is not. In 2013, Canton Zug passed a law making begging a crime. Anyone who is clearly soliciting money from the general public in Zug risks a standard fine of CHF 100.00. Built into the Swiss constitution is the fact that no one in Switzerland should be in a position where they need to beg: Title 2, Chapter 1, Article 7 states: "Human dignity must be respected and protected." And Article 12 states: "Persons in need and unable to provide for themselves have the right to assistance and care, and to the financial means required for a decent standard of living."


I suppose buskers aren't necessarily begging, but their open instrument case combined with their questionable musical talent makes me wonder. Below is my tiny poem about the street musicians we've been forced to listen to encountered in Zug:

Update: On September 12th I wrote a post about the Zug Bull Parade. In the paper yesterday, it was reported that the fundraiser raised 33,200CHF for youth sports and culture programs. Pretty cool...
Labels: Bridget Magee, Brusque Busking, children's poetry, street musicians