Living here in Switzerland is SO different from living in Tucson. (Did I mention the German?) Besides the language, the biggest difference for me has been the weather. Maybe it is my (ahem) age, but I am glad to be out of the desert heat. People always say, "Arizona is a dry heat", but when you're dripping with sweat, I'm not sure you can still call it 'dry'. Besides, hot is hot. I don't miss the heat in Tucson, but I do miss the people (especially one in particular).

When we arrived in Switzerland, the days were warm and the nights were cool - albeit more humid than I was used to. (Interesting tidbit: there is generally no AC in homes or apartments and there are no screens on windows anywhere we've seen.) As we've progressed through the month of September, the temperatures have gradually cooled and the need for closed-toed shoes and a fleece jacket have become the norm (and thanks to our air shipment I now have both!)

And it has rained every few days - glorious rain! Yes, we had monsoons in Tucson, but they were intermittent, scattered, and often violent short-lived storms. In Switzerland, steady rain falls for a day or two, then it is back to partly cloudy/partly sunny skies until it rains a few days later. Is it any wonder why the hills are lush and green? (In full disclosure we did experience, Joe first hand, one violent thunderstorm since living in Zug, but we'll have to wait until next summer for more of those.)

Another difference from Tucson is the appearance of slugs after the rains. I haven't lived anywhere that has as many slugs as here. Good thing they are so prolific, because their propensity for post-rain gatherings, "Slugfests", can't be helping their numbers. I was so unfamiliar with slugs, the first time I saw one on the wet sidewalk I thought it was an actual cigar! (See my post about the prevalence of smoking.)

Doesn't the fella below look like a cigar with antenna?


He (or she - I didn't check) and his friends are the inspiration for the following poem: 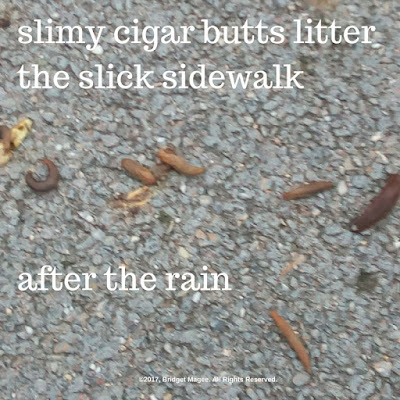