So a couple of weeks ago I wrote a post about the public art we've come to enjoy since moving to Zug. One particular type of art I highlighted was the brightly painted bulls that are displayed all over town. Being the American-centric person that I am, I just figured the Swiss were following the lead of US cities like Chicago, St. Louis, and Denver with their Cow Parades. But I got it backwards.

The Swiss city of Zürich had the first public art display of cows in 1998, but they called it "Land in Sicht" (roughly translated as countryside in view). The public art cow concept was brought to the US by a Chicago businessman who teamed up with the Chicago Cultural Affairs Commission to create the Cows On Parade show in Chicago in 1999. Since then many US, European, and even Australian cities have had similar displays.

But what about the bulls? Here in Zug there are bulls, not cows. Why bulls? This weekend we figured out the answer to that when we stumbled upon a display of all the bulls that have been around the city and surrounding area in front of the professional ice hockey arena. Apparently the bulls have been a part of a fundraising effort for youth sports and cultural projects partially sponsored by the local professional ice hockey team, EVZ, whose mascot is...wait for it...a bull! Go figure!

Here's a highlight reel of some of the most clever bulls on display:

My American-centric thinking didn't end with the bulls, unfortunately. Joe and I recently participated in a company sponsored "Cultural Training". Before we met with the trainer we were asked to fill out an extensive questionnaire. Every time there was a question that mentioned "foreigner" my mind immediately went to someone other than myself - someone who came from another country, someone who didn't speak English, etc. It wasn't until later, upon reflection (but before we met with the trainer) did I realize that the foreigner they were referring to in the questionnaire was ME! I was from another country. I didn't speak the national language which is NOT English. Boy, how egocentric/American-centric could I get? This self realization made for an interesting conversation with our trainer. And it has given me a more visceral empathetic view of anyone who is considered a "foreigner" in ANY country.

My poem below reflects the 'new' me...(see what I did there?) 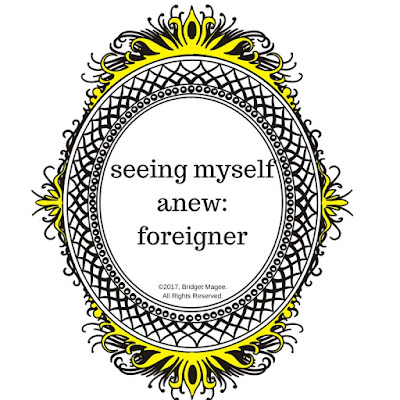 That 'mirror' image is one all of us might consider, Bridget. I wondered if "bull" was some kind of mascot, still see our cows all over town, and I have a small replica that was a gift. It's fun to hear the origins. You are learning, learning!

At least you no longer confuse Switzerland and Sweden!!

Thanks, Linda! Yes, learning about our new home AND about myself (in sometimes painful ways). =)