Since moving to Switzerland, time has taken on a whole new meaning for all of us, but most especially for Maureen. Today she started 8th grade at the International School of Zug and Luzern (ISZL.ch). As I mentioned previously we do not have a car thus we are dependent on public transportation - including Maureen. As such, in order to get to school she is responsible to get up on time, make her train, then her bus, and arrive in class before the bell rings. Every day. By herself.

In the time we've been here she and I have practiced the route to and from school together many times. We navigated the platforms and the bus station as a team. Then last week, she went alone several times. One day she couldn't remember which ramp/stairs to take out of the train station and missed her bus. Another day she missed the return bus by a few minutes and was forced to wait 40 minutes for the next bus. But with each solo excursion her confidence grew. Today, instead of waiting for the next train to get home (30 mins) she decided to take a bus back which got her home 20 minutes earlier than expected. Our girl is growing up...

Today I have a poem about how the meaning of time has changed for Maureen.
(Photograph is of Mo's hand and her new Swiss watch) 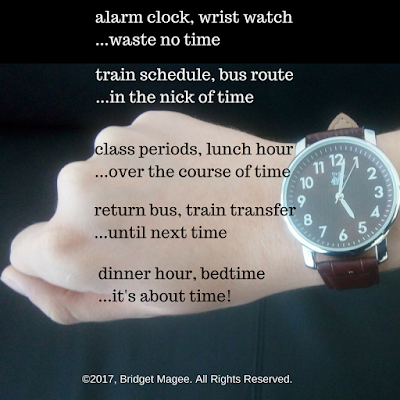