As many of you can relate, recent days, weeks, months have put me in a morose mood (understatement). Last Friday, I could not and would not engage in any way with the In*UGH*uration. Instead I went to the library and was lucky enough to find this gem of a book:

Inside this book is a treasure trove of important poems. Flipping through the pages I found a poem by Langston Hughes that I thought was particularly poignant after the speech given at the In*UGH*uration:

Misery is when you heard
on the radio that the neighborhood
you live in is a slum but
you always thought it was home.

On January 21st I participated in the Women's March, Tucson. It was an amazing experience to feel the solidarity. 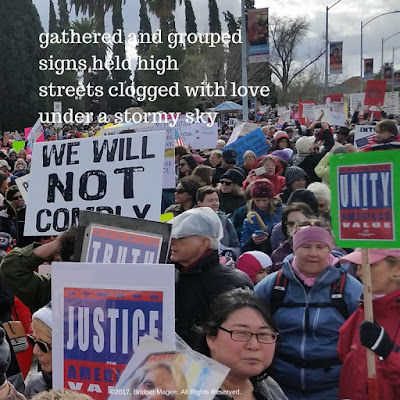 And for the last month, my mailbox has been very happy as I have received several New Year Poetry Postcards. Thank you to Jone Rush MacCulloch for organizing the Exchange!

From Brenda Davis Harsham I received a delightful Penguin Play poem complete with artwork by her daughter Anna! 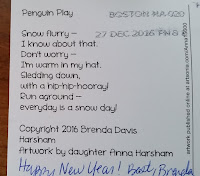 From Diane Mayr I received a Happy New Year greeting in Japanese: Akemashite Omedetou Gozaimasu! with an expertly crafted haiku:

And from Jan Godown Annino I received a "sign" about books postcard poem!

So much goodness. My heart is full, but not too full to enjoy this week's Poetry Friday roundup hosted by Carol Varsalona at Beyond LiteracyLink.